WHERE THE BUFFALO ROAM

I’ve not seen any historical records documenting American Bison a.k.a. “buffalo” traipsing around what is now known as Newton County, Indiana where I live. For one thing, most of the county was a marsh. A buffalo wouldn’t go far before it became bogged down in the bog. Maybe the southern part of the county was more bison friendly. Probably the odd group meandered through the native tall grass prairie down by the Iroquois River on a semi-regular basis. Most of Indiana and on east as far as Pennsylvania is listed as the original range of North America’s bison but the numbers were only a fraction of what existed in the Great Plains. 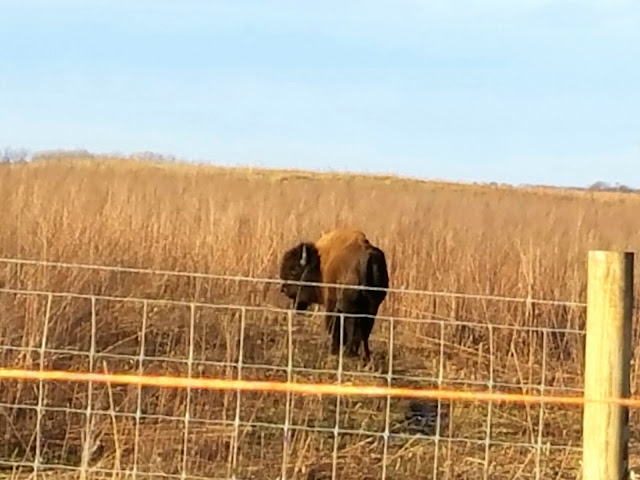 So how was it, Peggy and I went “buffalo hunting” yesterday just a few miles from our Newton County home?

Over a century and a half ago, back when most of the northern end of the county was half cattails, half under water and all mosquitoes, there was a large lake - largest in Indiana - covering around 40,000 acres, more or less, depending on just where the surveyor marked the lakeshore. Then a couple of steam powered dredges, trenched through Beaver Lake and drained it. Eventually, the lake bottom of old Beaver Lake became farmland and in recent history, The Nature Conservancy bought a sizeable acreage in the lake’s former location and began creating a prairie across the open landscape.

Though some bison lived in forested areas, they did best in open prairie habitat. So once the Kankakee Sands project of TNC created thousands of acres dominated by prairie plants, what was missing?  Prairie animals! Buffalo! So the TNC fenced off two sections of land (over 1100 acres) and stocked a couple dozen bison.

Yesterday was sunny and warm. I finished most of the chores I’d set for myself so I told Peggy to load up. We were going buffalo hunting!

We turned off of U.S. 41 and drove slowly along the gravel road bounding the southern border of the bison prairie. Then we coursed north on County Road 400W a mile and a half. No buffalo spotted, but it became quite apparent, seeing a buff in the tall vegetation would be nearly impossible from a vantage point on the ground.

A new road had been graveled leading a half mile to the east from 400 to what is left of Bogus Island, once a large island in Beaver Lake. Now it’s a hill, tall enough to give a buffalo hunter just the edge needed to spot one of the needle in a haystack bison. There’s a parking area there for bison watchers.

No need for us to climb the ancient slope of the island or even leave our vehicle. About half
way to the parking area, the herd was grazing just north of the road. At first, there appeared to be only one, then, as they slowly moved about, it was evident the entire group was there but in the tall vegetation, only glimpses of their backs and vague shapes could be seen, though the animals were only 50 yards distant, at most.
Posted by Mike Schoonveld at 5:30 AM No comments:

Bucks, boars and bears - and after opening day of deer season, I can add, “Oh my!” as well in a take off on the line from the classic movie, Wizard of Oz.  No bears or boars in this essay, but bucks and does aplenty thanks to the “Wizards of Slugs” at Lightfield Ammunition. 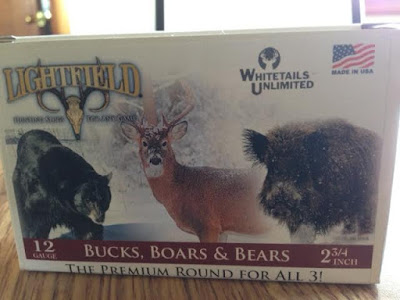 Full disclosure up front is warranted. I have three brothers who are avid deer hunters. One is avid in the sense he hunts every weekend of the gun season and maybe sneaks in a “sick day or two” depending.... The other two put “avid” to shame, being three season hunters, (bow, gun and muzzleloader) and are as apt to be out on a Tuesday or Wednesday as on a weekend.

More full disclosure, my brothers have produced a bevy of nephews and there’s a couple more (courtesy of a sister) coming up through the ranks who fit the term “avid deer hunter” as well. Put it this way. When gun season opens, I’m sure observation satellites overhead key in on the amount of hunter orange around my house and Brother Russ’s where the harvest is turned into freezer-venison.

More full disclosure, Brian Smith, Director of Sales at Lightfield Ammunition is a long-time friend and he knows the Schoonveld hunters are numerous, efficient and shoot lots of ammo each year, keeping their guns on target and using their guns regularly in the field. It helps that I am a freelance outdoor writer and blogger. Nothing stirs the marketing heart in Brian more than seeing mention of Lightfield slugs in print or on-line.

Last September at a writers conference Brian asked, “Have you guys been using any of Lightfield’s Bucks, Boars and Bear slugs?”  The short end of this story is he slipped us a healthy sample supply. The answer to the same question now would be, “Sure are!”

On paper, pre-season, only slight adjustments were needed to our scope mounted shotguns to get them sighted for the BB&B slugs. (We’d been shooting Lightfield Hybrid Lites for the last few years.)  Now, with opening weekend behind us, we can attest the BB&B slugs, introduced in 2015, are great on bucks (and does), and none of the shooters had any doubt they’d easily do the whack and stack on boars or bears where they are found and legal to hunt.

In Newton County the limit is one buck and three does per person. One brother and few nephews still have their buck tags. None have all their doe tags still available. No deer have been lost and most dropped dead where they stood.

Look for Lightfield BB&B at Cabela’s, Bass Pro and many independent stores or buy them on-line at www.tarhunt.com.


Posted by Mike Schoonveld at 4:57 AM No comments: