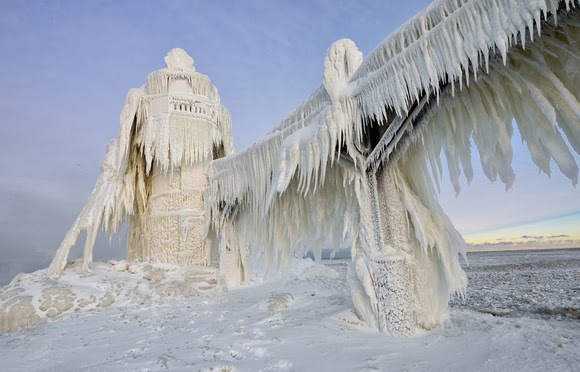 As of mid-February, all five of the Great Lakes are “officially” frozen over.  In actuality, they were 90% ice covered, but when they hit that level, the people in charge of observing Great Lakes ice conditions proclaim them to be totally frozen. The last time the lakes were frozen completely was in 1994.

In the Great Lakes, unfrozen areas can be the result of currents as in the Straights of Mackinaw, St. Mary's River, Detroit River, Niagara River and a few others. Industries and lake shore power plants discharge heated water in other areas. There can be wind-driven openings in the ice similar to pressure ridges that occur on inland lakes. 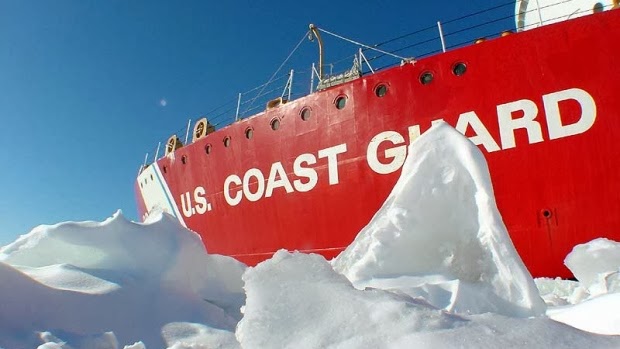 The U.S. Coast Guard operates a fleet of ice-breaker vessels on the Great Lakes. There's our tax dollars at work!  In some areas tug boats and other vessels do ice breaker duty to keep industrial harbors in action.
There are two silver linings to the frozen Great Lakes. Winter evaporation from unfrozen surface water in mild winters is one factor creating what’s become chronic, even record low lake levels. Related to the evaporation from the unfrozen lakes is, once the lakes are frozen, the lake effect snow machine is shut down. The upper Midwest is getting enough snow to satisfy most people without the lake snow this winter.

Will this have an affect on the fishing next season?  Maybe a late start to the action.... Maybe it will drive more fish down to MY end of the lake.... Hope so! There's only one way to find out. The fun way.  Let's go fishing !

THE END
Posted by Mike Schoonveld at 6:34 AM No comments:

WHAT’S FOR BREAKFAST
I love to eat fish. When I go out to a restaurant, the first thing I check out is the fish listed on the menu. Usually, my order is for the fish.

I’ll fly to the far reaches of Canada so I can have a shore lunch featuring the fish I caught during the morning action. I’ll always make sure on the way home the fish I caught arrive fresh, still frozen or otherwise ready to heat and eat.

But fish for breakfast? 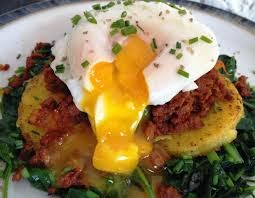 My mother-in-law introduced me to the concept on the shores of Leech Lake, Minnesota. We were there for a family vacation that included hauling dozens upon dozens of jumbo perch from the lake’s waters. On the second or third day, Grandma Huber fired up the stove and fried up a batch of perch filets, coupled them with some eggs over easy and I was hooked.

Who knew fish for breakfast was such a culinary delight?

We just returned from Captiva Island, Florida, much of the time sharing adventures with Bill and Rita Keaton.  Bill and I fished the first day and caught a couple of “keeper” sized sea trout, aka spotted weakfish. We kept them.

“What should we do with the fish?” asked Bill.

“Fish and eggs for breakfast,” I replied.

Our rooms at South Seas Island Resort included a kitchen, pots, pans so all we needed was a few extra ingredients.  We were set after a quick stop at an island shop to pick up eggs, bread and butter.

Bill put several slices of bread in the oven at 200 degrees to dry them out, the first step of making breadcrumbs.  Once I arrived with the fish I preheated the oven to 500 degrees. Then I cracked an egg into a bowl, added a half eggshell of water to the egg and vigorously whisked it. Each filet got a quick dunk into the egg wash, then a roll in the breadcrumbs and into a baking dish.

While they were baking, Bill cooked the eggs in a bit of butter, we toasted a few slices of bread and set out glasses of orange juice.

If you think bacon, ham or sausage are the only meats that go great for breakfast, think again. Fish, light and flaky, is a perfect compliment to your breakfast menu. They taste even better, if you've caught them yourself.

Posted by Mike Schoonveld at 4:27 AM No comments: