I’d like to say my recent trip to Florida left me with a bit of sunburn, some great memories and some new appreciation for America’s Sunshine State. On one hand, it did. On the other, it was a sad snapshot of what America has become and where it’s likely heading.

What started with a trip to Allegiant Airlines website checking on prices to Mesa, AZ ended up with $49 tickets to Sanford, Florida from Gary, Indiana. I couldn’t pass up the deal.

Sanford is just north of Orlando and if you follow the shortest route from there to the east, you run out of road on Florida’s “Space Coast.” From the backyard of the cottage we rented you could look across the Indian River Lagoon and see the space shuttle buildings at the Kennedy Space Center.

Peggy and I passed on a visit to the Space Center’s Visitor’s Center at 38 bucks a ticket so we detoured to the other side of the place and toured the Merritt Island National Wildlife Refuge. The “wildlife drive” cost only  five bucks a car (and is free to visitors with a duck stamp) and we probably saw as much neat stuff - though different - than what we’d have seen at the space center.

We got some sun. Saw some alligators. And more.

The more, sadly, is the almost third world look to Titusville and nearby communities on the Space Coast. The area has been dealt a triple blow.

There’s plenty of evidence that the insanity that created the “housing bubble” was in full bloom in the area a few years ago. There are condos, developments and “planned” communities as well as bridges and roads to nowhere. Now that’s evolved to half-filled condos, developments going back to nature and roads growing weeds in the cracks.

All of Florida is tourism driven and a haven for snow-birds from northern states who choose to winter where it’s warm. The down economy has changed that. Why else would all the hotels and R.V. parks be half (or more) empty at what should be the high season? 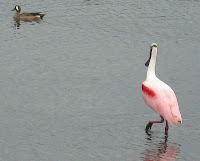 The third whammy is the end of America’s space program. The empty homes, closed businesses and abandoned strip malls show what happens when the major employer in an area closes.

Perhaps that’s why I enjoyed the trip around Merritt Island. The ducks, shorebirds and ‘gators don’t much care what’s happening on the mainland.
Posted by Mike Schoonveld at 5:04 AM No comments:

THEY’VE GOT MY NUMBER

I dispose of most of the pelts from the animals I capture on my trap line each season either by selling them directly to the itinerant fur buyer who runs a route several times each year through my area; or, I take them to a drop off point where a representative from North American Fur Auctions stops to pick up pelts which will eventually be sold at auction.

At the end of the season there always seems to be a small pile of pelts which, for one reason or another, didn’t make it into the normal distribution stream. Those I bundle up and mail to a NAFA depot.

There are regulations in effect by the U.S. Postal Service detailing items which are not permitted to be sent through the mail. No doubt some of these are reasonable, others, somewhat dubious; and no doubt, a few that are obscure to most postal customers.

I’ve never been a good “guesser” of what’s inside a wrapped package. Christmas is always a source of surprise for me. Perhaps one of the qualifications to be a Postmaster is a requirement to be a good guesser. At least the Postmasters in the two Post Offices nearest me are that way.

I don’t know exactly what I’d “guess” was inside the bundle I hauled into the post office, if I’d not packed it myself. I stack the pelts tightly in a large, “plastic-burlap” sack, then roll up the bundle, securing it with bands of duct tape. They could be crafts, an old army cot, a couple of those pop-open canvas lawn chairs or probably a hundred other things.

So I was completely caught off guard when I stepped up to the window and the Postmaster points at my bundle and says, “You don’t have any dead animals in there, do you?”

Not knowing the regulations, I quickly surmised that being completely truthful could lead to problems. So I was evasive. “You’ve got my number, don’t you Marty!” That was 2011.

Yesterday, I went to a different post office. Postmaster (don’t call me Post-mistress) Amy was at the counter. She sized up my bundles and said, “Do I really want to know what’s in those packages?”

Busted two years in a row!  How do they know?
Posted by Mike Schoonveld at 7:27 AM 1 comment:

DISCLAIMER: THIS POST IS TONGUE IN CHEEK, SATIRE, IRREVERENT, AND HAS ONLY A SMALL AMOUNT OF TRUTH TO IT.  YOU JUDGE HOW MUCH..... 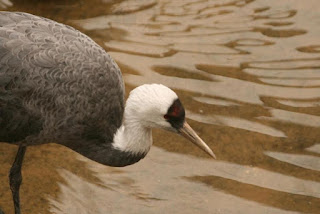 I received a News Release from the Indiana DNR this morning and also saw a posting on Facebook, that a Hooded Crane (native to Asia) has been spotted at Indiana’s Goose Pond Fish and Wildlife Area. Despite the DNR’s seeming acceptance of this, if not downright joy, this can’t be good news.

What the DNR calls a “wayward visitor,” I recognize as something more insidious. At best it’s another invasive species; at worst, it’s the latest ploy by anti-hunting groups to eliminate or curb legal hunting activities by American Sportsmen.

Let’s examine some facts. The hooded crane is native to Asia. Most of Asia is owned or under the control of China. Nothing good ever came from Asia. Asian carp, Asian honeysuckle, Asian elm trees, Asian lady-bug-beetles, tofu, bird flu - it’s a long list - many of them listed on noxious invasive species lists, others that should be listed. How can this Asian crane be any better? What havoc to native crane populations and wild ecosystems will this newest “alien” wreak?

The DNR release speculates the crane will migrate back to its Asian home in the spring. Want to make any bets that it will be back next winter and bring along some of its hooded crane buddies?

Who is the major opponent of legalizing crane hunting? Anti-hunters and bird watchers (who are often one and the same.)

Why is the DNR celebrating the Asian crane at Goose Pond? Because it attracts birders! News of the crane’s arrival is hardly out and already more than 100 bird enthusiasts have visited the property from as far away as Minnesota, West Virginia and Nebraska - thousands more are expected.

Do you suppose intermingling “rare” Asian cranes into flocks of sandhill cranes is going to help or hinder efforts to legalize crane hunting in Indiana?

Since Indiana was first explored over 200 years ago, a total of zero Asian cranes have been noted in the state. Which is more likely? A) One Asian crane has boldly flown to where no other Asian crane has ever flown before; or B), the HSUS (with an annual budget larger than any state’s DNR) smuggled some hooded cranes to the US and stocked them in states considering sandhill crane seasons?
Posted by Mike Schoonveld at 6:36 AM 1 comment:

Although there are outdoor opportunities galore for those who opt to participate during the winter months, few are done without a lot of effort. Often times, the effort to participate is a part of the experience and though peripheral, is as good a measure of success as any.

For instance, last winter I traveled to Michigan’s Upper Peninsula in the dead of winter to ice fish on a snowy, wind-blown lake. The goal may have been to catch enough perch to provide protein for dinner that evening, but comfort and survival were just as important.

But that doesn’t mean I truly love winter. I endure it. 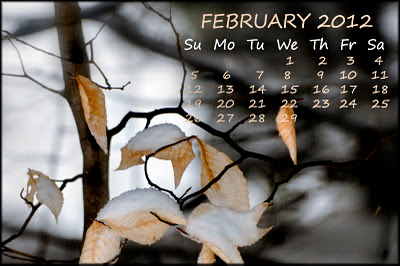 That being the case, why is February one of my favorite months? Both of my children, my mom, George Washington and Abe Lincoln were all born in February. Does that make it a favorite?

Ground Hog Day and Valentines Day fall in February. Am I all in for these holidays?  No, and it’s not Superbowl Sunday or the quadrennial celebration of Leap Year day.

There’s no promise to December. It’s as likely to be cold and snowy on December first as it is on New Year’s Eve. January is worse. Regardless of what the weather is like when you get up on January first, you know there’s every chance the weather will be worse on January thirty-first.

Jump ahead to March. It’s no better. The adage of coming in like a lamb, out like a lion or vice versa is true. Weather reports for March first and thirty-first are often similar or it’s just as likely to be more inclement at the end of the month than at the beginning. For warm weather fans, March holds no promise.

But February is full of promise! It’s the beginning of the end of winter. If it’s below zero on the last day of January, it’s just as likely to be as cold on the first day of February. But it’s not likely to be that cold at the end of the month.

Sure February weather will produce winter doses of bone-chilling cold, wind-chills, sleet and snow. But it will also feature increasing numbers of days with bright sun and thawing temperatures. Most important, the trend is upward. As the month progresses, winter wanes and summer gains.

Don’t hang up your winter parka. Don’t bother getting out your flyrod. But each February morning, face the day knowing the end of winter approaches.
Posted by Mike Schoonveld at 7:04 AM No comments: