I've never published one of my weekly outdoor columns as a blog. This time is different. Below is my column about Snowy Owls, normally a creature of the far north, irrupting into the Midwest. The column came out in this weeks paper and I got a call from a good friend alerting me she'd spotted one very close to where we live.

I showed my column to my daughter, Abby, home for the Holidays and then told her,

She asked, "Interesting, but what's up now?"

So I grabbed a couple sets of binoculars and off we went on our quest.  Sure enough, a mile west of Brook, Indiana, about 3/4s mile north in a bean field on the west side of Meridian Road was the bright white visitor from the Arctic.  Too cool.

Here's my column for those of you who don't get our local papers. 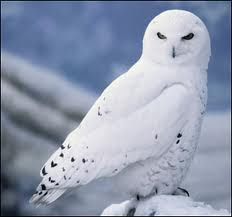 A DIFFERENT KIND OF SNOWSTORM
By Mike Schoonveld
We are well into winter and well into the routine that comes with snowstorms seemingly lined up in a regular pattern this season. But there’s another kind of snowstorm heading our way, one that just might offer us a brighter attitude about the cold dark days of winter.
The far north tundra areas of North America and Europe is the normal range for birds named the snowy owl. They are large owls, similar in size to great horned owls and barred owls frequently seen in this area. But they are white, or nearly white. With age, a few male snowy owls do become completely white while females and younger males have dusky-tipped feathers making them look somewhat spotted.
Most years they live in their native tundra areas all year around. Their staple food is the lemming, a short tailed rodent about the size of a chipmunk. People who have studied snowy owls determined they normally eat four or five lemmings each day.
But like many species of wildlife with high reproductive rates, the lemming population tends to be cyclic. Some years there are lemmings seemingly everywhere; in other years, lemmings become scarce.  Snowy owl populations fluctuate as well. Every so often, a higher than normal number of owls are faced with a lower than usual number of lemmings.
When that happens snowy owls have two choices, stay and starve or leave to find food elsewhere. When a bird population that’s not normally migratory suddenly leaves it’s normal range it’s called an irruption instead of a true migration. From early reports, it’s looks as though a snowy owl irruption is taking place.
The center of focus for this year's invasion is the Great Lakes and Northeast. Keep an eye out for these northern owls in open areas while you're outdoors or even just driving through the countryside. Don't overlook that white bump in the middle of a farm field or on the peak of the house next door. It just might be a snowy owl.
Because they normally live in areas where there are no or very few humans or automobiles, snowy owls aren’t particularly wary of such things. I’ve only seen one live snowy owl and it was sitting on a fence post along U.S. 41 just north of Enos. I turned around, came back for a better look and it just sat there staring back at me only 20 feet away.
This lack of wariness often proves fatal when it comes to avoiding speeding vehicles. The snowy owl on display at the Willow Slough HQ was killed by a passing car just south of Lake Village several years ago. Three snowy owls were  killed recently at New York City airports by animal control agents.  This action was deemed necessary to protect passengers after instances when owls were sucked into plane engines. Once the owl shootings became public knowledge, the airport policy quickly changed to “capture and remove” should any new arrivals show up.
These birds normally live in the tundra, an area completely devoid of trees. They instinctively seek out similar open areas and that’s one of the reasons they are attracted to airports. It’s also one of the reasons they are likely to find our open expanses of farms and fields to their liking this winter.
The Cornell Laboratory of Ornithology has a program called eBird. Bird enthusiasts from across North America keep track of and report the sightings of snowy owls and other birds. Cornell tabulates the reportings and publishes updates regularly at the website: www. ebird.org.
The current map shows numerous sighting in Indiana and Illinois. The path of the sightings indicates most of owls irrupting this year originated from eastern Arctic in North America or Greenland.  Snowy Owls are one of the most impressive animals on the planet. You don't have to be a bird watcher to appreciate how cool they are.

THE END
Posted by Mike Schoonveld at 12:53 PM No comments: