The beginning of this story is a footnote to the story below. When Molly is in the house, her favorite daytime spot is on a throw rug by the sliding door leading out to the patio/deck area. South facing, she stays warm there on sunny days; but more importantly, it gives her a view of the bird feeder so she can keep an eye out for rogue squirrels infiltrating.
Usually, when she heads out from that door, it’s a beeline to the base of the feeder or to the bottom of whatever tree she believes is most likely to harbor a squirrel. Recently, however, she’s made a stop by a large, decorative rock positioned adjacent to the steps leading down from the deck. I’d never seen anything there, but perhaps a squirrel had sat there, taunting her sometime earlier. 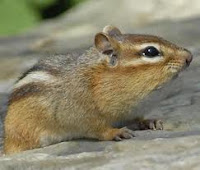 Late afternoon, on January 28, I learned what had captured her interest. Perched on the rock was a Tamias striatus, an Eastern Chipmunk.
“Go figure,” I thought to myself. “I thought chipmunks were true hibernators in that they stored up fat reserves in the fall, burrowed deep below the frost line and spent the winter months snoozing."
I’ve never lived where chipmunks were an abundant yard animal, and even here, though I’d spotted a chippy or two around the fringe of our yard, the population isn’t large. Maybe people who have healthy populations of chipmunks aren’t be surprised to see them out foraging in winter.
A quick check on the Internet proved to me I’m only partly right. Some animals such as bats or woodchucks truly hibernate. Their metabolic functions slow to near death and they live off of stored fat reserves all winter long. If you were to find one, you’d think them dead or at least unconscious.
Other animals “almost hibernate” such as bears. These animals hunker down for the winter, their metabolism slows modestly, but they don’t often stir, feed or leave their burrow.
Chipmunks have evolved in another direction. They don’t bulk up with fat reserves for the winter; rather, they store seeds and other foodstuffs in their underground burrows and then wake from their winter torpor when they get hungry.
Now that’s the way to spend winter. Stay in a warm nest with plenty of food and wait for spring.
I don’t know if the little chipmunk ran out of its stored food and is resorting to winter forays to glean the spilled seeds from the bird feeder or just likes to come out for a breath of fresh air on warm, sunny days.
If nothing else, it’s just one more creature for Molly to monitor. This, while she sits in the warm sun waiting for spring, as well.
Posted by Mike Schoonveld at 6:54 AM No comments:

Trapping is usually not a group sport. I’ve heard of a few teams of trappers who would ride together and work together, but those are in the minority. Often, even when two or more  people trap together, they more or less go their separate way and only occasionally touch base with one another during the day. So day in, day out, it’s just the trapper and his own thoughts - and maybe the radio or stereo system in the trapper-truck.

That’s why many trappers adopt a Trapping Dog. Proving once again a dog can be a man’s best friend, a trapping dog can help keep a trapper focused and happy during the daily rounds.

Molly is my trapping dog. She looks forward to each day as much or more than I do. Ever alert, she looks at captured raccoons, possums or coyotes as mundane. She’s watching for squirrels!

When not out on the trapline with me, she’s content to spend her  day protecting the bird feeder from marauding bushy-tails. Her goal in life is to actually catch one!

Alas, backyard trees afford a convenient escape for the raiders. They know it and continue to steal food from our resident flocks. I’m not sure Molly knows they are uncatchable. She shows no signs of relenting.

But on the trapline, Molly stays focused. She knows one day, she’ll encounter a squirrel just far enough from a tree to make good. If not, when the day’s trapping is over, it’s a quick sniff of the animals caught, then back to her post near the bird feeder. Tomorrow’s another day.
Posted by Mike Schoonveld at 7:51 AM No comments: 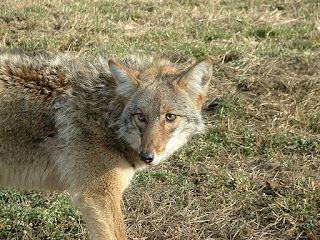 How many times have you heard comments that though it's cold outside and often tough going in winter garb, at least the bugs aren't bad? So far this winter, we've had only glimpses of normal temperatures. Last week we hit a single digit  overnight temperature once, but a few days later it was almost 60 degrees.

But at least the bugs aren't bad!

I caught a coyote yesterday that might have told a different story. As I was cleaning and brushing the pelt to preserve it until the next time the fur-truck shows up, I felt a familiar lump, up by the animal's ear.
Sure enough, the coyote was wearing a January tick!

A quick check of the literature available set the air temperature at which ticks are active (at any time of year) at 4 degrees celcius, which is 39 degrees Fahrenheit. Evidently the tick climbed aboard mister coyote one of those warm days we had recently.

Remember, however, there are always micro-climates in the outdoors. South facing slopes and other areas warm up to appreciably higher temperatures on sunny winter days. Such areas are favorite resting areas for many species of wildlife, including game and predators. That makes them good places for hunters, nature photographers and birders.

If that includes you, enjoy the winter, but be a skeptical  about any claims of winter being free of bugs. The sneaky little boogers are still there!

Posted by Mike Schoonveld at 6:34 AM No comments: 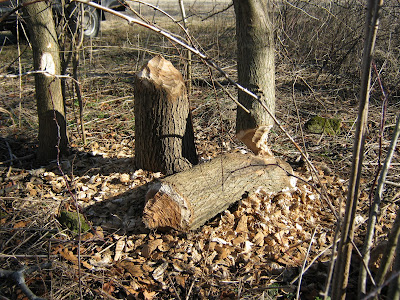 Everyone knows beavers cut down trees to build their dams, lodges and to make submerged food piles on which the beavers can feed in the winter when ice covers their ponds.

I found a spot recently where a gang of the tree-cutters had been very active and in unusual ways.


In one area a determined beav had gnawed down a tree twice and it still hadn’t tipped over.

The tree that wouldn’t fall was a wide-limbed mulberry which had branches so intertwined with nearby trees that once the beaver bit completely through the trunk, all it did was slide off the stump and stand straight, held upright by the surrounding trees. The enterprising (if not overly smart) beaver wanted that tree.

So he cut it down a second time. The mulberry tilted a little, but still didn’t fall. I’m monitoring the situation. Maybe today there will be another little log made!  Once he’s done, I’ll gather all the chunks for firewood. 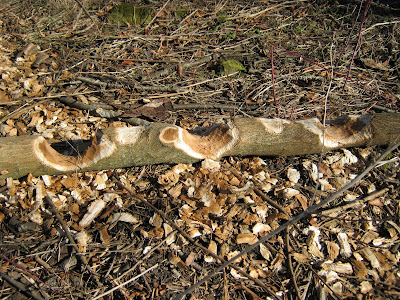 Nearby, a beaver had better luck.  A different mulberry tree had been toppled, most of the upper branches had been hauled off, then the beaver, or I like to think the team of beavers, decided to have some fun. And if you are a beaver, what’s more fun than a tree gnawing contest?

Check out the photo and imagine three  beavers lined up, shoulder to shoulder, teeth bared. When the signal is given they dig in like Boy Scouts at a pie-eating contest.  I can’t tell which one won the award, but I bet the chips were flying!
Posted by Mike Schoonveld at 11:57 AM No comments:

I know for many, today, January 3rd is the end of the holiday season and time to get back to the grind of everyday work. So it is for me, as well, but my job this week is somewhat unusual.

Friday is the day I need to meet the fur trucks.

A part of the pelts I harvest on my trap line go to NAFA (North American Fur Auction). Founded by the Hudson Bay Company, now independent, trappers from across the country harvest their pelts and ship them to NAFA, take them to drop-off depots or meet with NAFA reps as they drive routes through each state. NAFA schedules periodic auctions and sells the furs to buyers from around the world.

In my case, the drop-off depot is in northeastern Indiana, a good two hour drive away. Mailing pelts - especially big raccoons and coyote furs - is expensive and cumbersome. The NAFA agent for Illinois makes a stop just off I-57 near Kankakee, Illinois, only about 40 miles away so I'll take them there. He only shows up twice a season and Friday is his last trip.

Later that evening a truck from the Groenwald Fur and Wool Company will make a stop at Rensselaer, IN about 15 miles from my home. The GFWCo truck schedules routes throughout the upper Midwest, making scheduled stops at regular intervals to purchase pelts from fur harvesters in that region. GFWCo comes only 3 times a season and Friday is his second route through my area.

At this truck, you offer the pelts you have for sale, the Groenwald buyer sorts them to size and quality and then offers their going rate. Say you have a cross-section of sizes and quality of 20 raccoons. The buyer might pile them into 4 stacks and then say, “You’ve got 3 at 25, 4 at 18, 9 at 12 and 4 at six dollars.”  You then have the option of accepting all, some or none of his bids.

So my week will be devoted to getting my harvest stacked and sacked, deciding which one’s to sell at auction and which one’s to sell directly to the buyer. In the end, I’ll have earned a few dollars - just like millions of other Americans trading their time, skills and energy for money.
Posted by Mike Schoonveld at 7:03 AM No comments: