Most shotgun shooters agree anything they shoot at standing or flying 40 yards or less is in deep doo-doo if they shoot accurately. So doing the math, if a duck, turkey, rabbit or other game needs is in the same acre with them, it should be an easy shot.
Here’s the math. The formula to compute the area of a circle is pi (3.14) times the radius of the circle, squared.  Pi-R-Squared.  In this case, the radius is 120 feet. 120 X 120 X 3.14 equals 45,216 square feet.  There are 43,560 square feet in an acre so a 40 yard circle is just a tad larger than an acre. 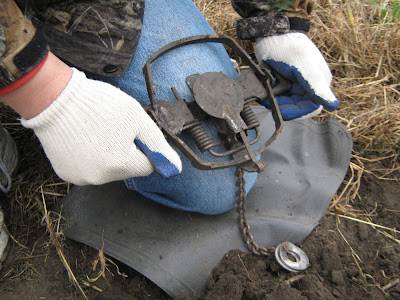 Modern bow hunters usually feel comfortable twanging an arrow at a deer 30 yards away.  That’s tougher.  Using the Pi - R- Squared formula and dividing by the number of square feet in an acre, a deer hunter has to get his quarry in about the same six-tenths of an acre with him for it to be in range.
Indiana is a muzzloading rifle/deer slug only state. Though modern muzzleloaders have extended their range appreciably in the past decade or so and shotguns with scopes, rifled barrels and modern ammo make accurate longer shots possible, most deer-shooters accept a 100 yard shot is an acceptable range to bang away at a deer with either gun.
Doing the math as before, all a deer hunter needs to do is be in the same six and a half acres and Mister Big Buck is as good as dead.
When I set a coyote trap, my “kill area” isn’t registered in acres or even square feet. The trigger on my traps are about two inches in diameter. Pi-r-square two-inches and you have a target area only about 3 square inches in size. If the coyote steps on that 3 square-inch spot, I win. If not, the coyote goes his own way.
So what’s the toughest game in town?  I’m putting my money on coyote trapping, especially if you do it mathematically.

Posted by Mike Schoonveld at 3:00 PM No comments: