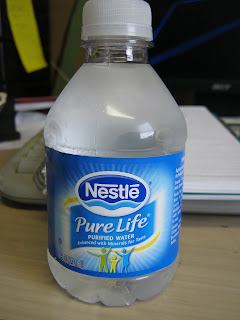 I remember the first time I saw a person drinking “bottled” water. She was one of the “cool girls” in my daughter’s class in high school, so obviously, drinking bottled water was a cool thing to do.

Cool or not, it seemed weird. She was 10 feet from a concession stand where Coke or other soda pop was being sold and less than 10 feet from a drinking fountain where she could have gulped down as much water as she wanted - for free.

I’ll admit to having taken a drink from “water cooler” bottled water dispensaries a time or two in my past; but doing so was a novelty, having as much to do with using those little cone-shaped cups as really being thirsty. I’d never given thought to why the water coolers were there, other than poor plumbing planning.

When it came to drinking water, I was never picky. The few times I was somewhere with really bad tasting water, I just manned up and downed it - foul flavor or not. Secondly, I was never a “recreational” water drinker. I drank water when I was parched, taking a pill or brushing my teeth. Otherwise, I drank Kool-Aid, soda-pop, beer, coffee, iced tea, milk - whatever. I was also enough of a pragmatist (or so cheap) that the idea of paying for water in a bottle when it flowed freely from taps and drinking fountains was unthinkable.

I just read a news story about a new water controversy. It seems several colleges and universities are now banning bottled water. Drinking bottled water has gone from being the “organic” thing to do - “who knows what’s in the liquid that flows from the tap” - to a very environmentally “insensitive” thing to do.


Not because the water is better or worse. Most places it’s because of the bottles, which are (pick one or more): plastic, made from oil, ends up in landfills, or on beaches or not the best plastic to recycle, causes cancer, chokes billy goats - or pick your own version of horrible. 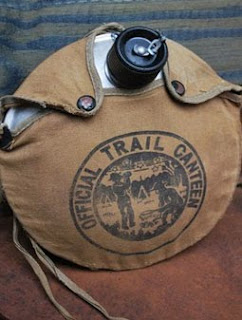 We did that when I was a kid in Boy Scouts. We called them canteens. But they weren’t cool.
Posted by Mike Schoonveld at 7:45 AM No comments:

Technically, I grew up in town, but our house was on the very edge of town. In fact, our lot had cornfields to the west and north and when dad bought the property, the northeast side was a cow pasture and the house came with a barn and barnyard.

Let’s talk about the town. No one ever counted the residents to the last person. We called it 1000. When the highway put up a new city limits sign they pegged the population at 900, give or take a barnyard, so in the eyes of most people, I grew up in a rural area.

I considered it rural, myself. Because I had “city-boy” cousins.

Cousin Steve was the closest to my age and he spent more time at my house in Brook than I did at his house in Indianapolis. I liked it that way. When I was at his house in Indy, we did, ah, well, I don’t remember doing much since there wasn’t much to do. It was city.


When Steve was at my house, not only was there plenty to do, I now had a friend almost my age to do it with and to teach new things.  Things like fishing at the bayou and shooting BB guns. In a recent email I got from Steve, he mentioned hunting snakes.

Steve and I were at Purdue at the same time and once he graduated he went on to grad school, eventually getting a PhD and becoming a college professor in New Mexico.

A part of his doctoral work took him to the jungles of South America living with native tribes. I like to think our snake hunting and camping out along the Iroquois helped him in the rain forest.

But between growing up in the city, life in academia, eventually becoming the head “computer wizard” for the State of New Mexico under the Bill Richardson administration, he became a Democrat. Obviously, though his youthful trips to Newton County foster fond memories, they didn’t help him forge his political philosophy. (Though I suspect a New Mexican dem is probably more conservative than a New Englander GOP supporter.)

Cousin Steve recently announced his candidacy for the New Mexico congress. Go for it cuz! I told him there’s no cheaper political advertising than to be mentioned in the pages of the newspaper so I’d write up his campaign for office in my weekly outdoor column in the Brook Reporter.

There aren’t many voters in Steve’s district that read the Brook newspaper - probably none - but the world wide web is accessible even in Santa Fe. So here’s my bi-partisan plug for my cousin Steve.  Vote for Easley. He may be a democrat, but he’s a great snake hunter.
Posted by Mike Schoonveld at 6:36 AM No comments: 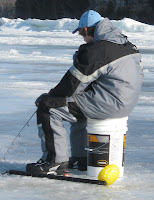 I’ll be the first to admit I’ve purposely avoided ice fishing for probably the last 3 decades or so. Other than an ill-fated trip to Marquette, MI last winter and a day of jigging for lake trout in Thunder Bay, Ontario in the mid-90s, me’n ice fishing have kept our separate ways.

Perhaps it’s a failing memory of frozen cheeks, fingers and toes. Maybe my life thrills have dwindled to the point the pure boredom of staring at a small, round hole in the ice now sounds exciting. Maybe I’m so caught up with the things I need to do that a few days of ice fishing made it to the top of the list. Regardless of why, there I was, sitting on a bucket, on a foot of Green Bay, Wisconsin ice, bundled against the cold with a miniature spinning outfit in hand. I was ice fishing!

Day One guide, Dale Stroschein (Wacky Walleye Guide Service) told me that between the stretch in the 4-pound line we were using and the flex in the tiny fishing rod, you have to almost “imagine” the bite of a whitefish, rather than feel the strike. 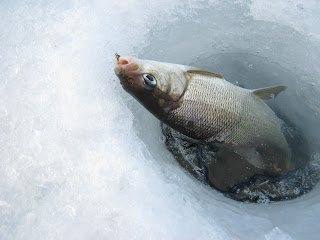 Dale “imagined” two of them from a hole not 15 feet away before something felt slightly different on my own outfit. Soon I had the first ice-caught fish in years coming through my hole. Then I let my imagination run wild!

The next day, fishing with J.J. Malvitz, (JJ’s Guide Service) we didn’t need much imagination. JJ provided ice shelters (so did Dale, but it was not cold enough to require being inside). With the shelter blocking the wind and the reflection of the sky blocked by the ceiling, we could peer into the ice holes and see the bottom, our jigging spoons and the whitefish looking at our baits. 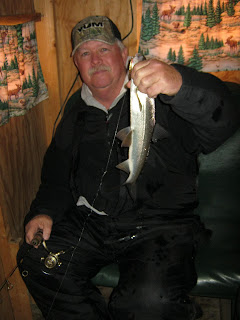 No imagination needed! When you saw the fish bite, set the hook! The experience was a “hole” lot of fun. Plenty of fish and no cold toes. That’s about as good as it gets for winter fishing.
Posted by Mike Schoonveld at 6:45 AM No comments: