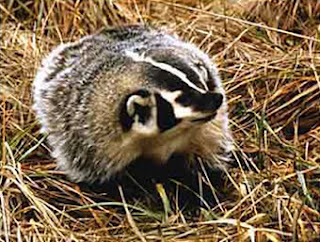 I well remember the first badger I ever caught in one of my coyote traps. The trap site was at the top of a sandy hillside and even when I was 50 yards away I knew something strange had occurred.

Most trapped raccoons and coyotes spend some of the time from when they are caught until you get to them digging. A particularly industrious digger in light, sandy soil may shuffle around a half bushel of dirt that is fairly easy to level out once you remove the animal from the trap.

At the top of the hill was more than a bushel or even two bushels of dug up dirt. It looked like a back hoe had been in operation. Or a bomb. When I got to the trap site, or should I say, excavation, it looked more like a bomb. The hole was easily 4 feet deep, the rim of dirt encircling the hole was about 2 feet high. The bomber was a badger.

Though badgers aren’t uncommon in Indiana, they are protected. A few miles west of where I trap, in Illinois, they would be fair game. In most places badgers are considered to be pests because of the holes they dig when they prey upon gophers and ground squirrels. 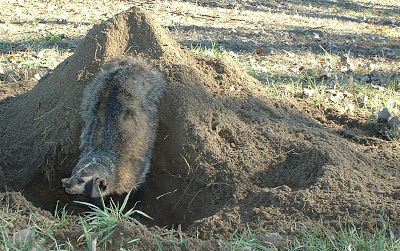 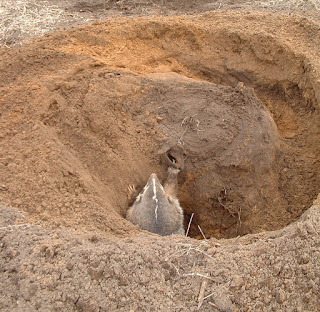 I carry a snare pole with me at all times to assist in releasing captured animals. Loop the snare around the animal’s neck like a collar on a dog. Except badgers have necks like linebackers. So there’s always an element of uncertainty!

The one I caught yesterday was no exception. Bomb crater, snarls, teeth and claws. Eventually we parted company, both unscathed. Then the work. The dirt has to go back into the hole. And I don’t carry a backhoe with me on the trapline.

Posted by Mike Schoonveld at 6:02 AM No comments: 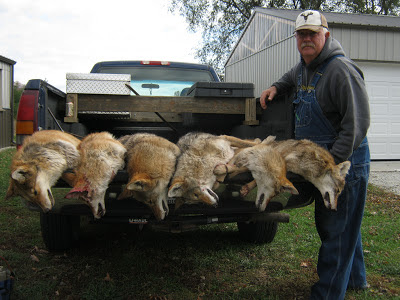 There’s no limit on the number of coyotes a trapper can catch, either on a daily basis or seasonally. Many trappers are happy if they only catch a few, others aren’t happy unless they catch hundreds each year. Me? During the first month of trapping season when only coyotes are legal, I have a goal of catching one and one half coyotes each day.
I realize it’s impossible to catch half a coyote so my actual threshold for success is to catch one or two each day. Why not more? Because of the work involved after the catch.

I’m a recreational trapper. If I have one or two coyotes in the truck at the end of my check, I haul them into my shed and open a beer while I remove the pelts, clean up the fur and slide the hide on the stretchers to dry. Depending on the mood, some tunes or talk radio makes for a pleasant end of the afternoon. Need be, I’ll crack open a second beer. More than that, the work takes precedence and time disallows any casual quaffing of beers. It’s drudgery!

A few years ago my goal of one or two per day worked out almost perfectly. I had one day with zero catches, two days with 3 catches and all the rest were one or two. I’ve come close to perfection the last couple year and was on track this year, as well. Until today.

After finding my bait dug up and coyote tracks all over my first set, but no coyote, then nothing in the next few places I’d placed traps, I caught number one in the corner of a corn field. Then I caught another on the next farm I checked. Then three traps later, at the end of a row of pine trees number 3 for the day was encountered.

“Oh Molly,” I told my dog who rides along with me as I check my traps, “We’ve over bagged.”

The next spot had only been set 2 days ago and since it has a good history, I’d installed 2 traps there. Both of traps were clamped solidly to coyote feet. One was a youngster, the other a mature male.
With only one last field to check and two traps set, I thought the five in my truck was it.
Wrong! The next to last trap had a small blonde coyote nailed down - probably a litter mate to the one I caught in the other set yesterday. Six in one day far exceeds my wants, expectations or the amount of work I wanted to do.

But I did it. Maybe tomorrow I’ll get a day off - or at least time for enjoying a beer while I work.
Posted by Mike Schoonveld at 3:19 PM No comments: 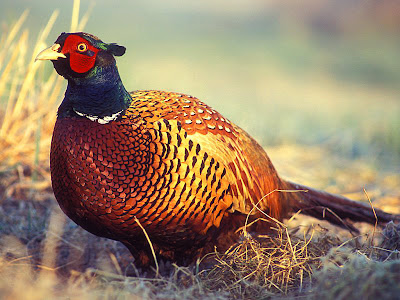 The United States is often called a nation of emigrants. That is certainly true of the citizenry, but almost as much from the wildlife. Nowadays, many of them are called “invasive species” and devout environmentalists hate them.

More than a few of them have proven to be welcome additions to the native fauna of an area by most people (and even a few devout environmentalists).
No species has made a bigger impact than the ringneck pheasant.

First imported to the Willamette Valley in the Pacific Northwest, they’ve been transplanted to every state in the country. Most places the introductions failed. The birds are adaptive, but not that adaptive. In a few places they thrive, given ample habitat. There’s no place in the country they fare better than the State of South Dakota.

I have feathers in my future. Long feathers. Feathers plucked from the tails of wild, South Dakota ringnecks. Hopefully, probably, unless I fall in a badger hole and break a leg, one could say undoubtedly, there will be several sets of tale feathers sticking out of my game pouch for the next several days. 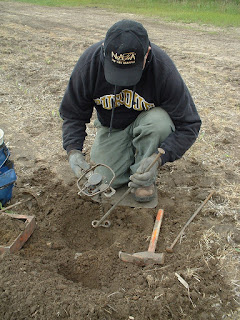 I posted a note on Facebook early yesterday making a statement and a rhetorical question. “Coyote trapping season opens today. Am I surprised it rained more than  2 inches over the weekend?”

That’s just one of the challenges of trapping for Midwestern coyotes. Couple that with unharvested fields, harvested fields the farmer feels the need to disk or plow in the fall and fields freshly planted with winter wheat and access to my normal trapping locations is always a factor.

Most of the other challenges are more Mother Nature oriented. Wind and wind direction certainly has an affect. Even a drizzle of rain that doesn’t turn fields into lakes can ruin the best-made set.
Then there’s the quirks of trapping a very intelligent and cautious animal. Coyotes are strong. The gear and technique used have to be top notch or the animal will find the weakness and exploit it.

So what will I find when I get out on my trap line today?  I’m uncertain. But I’m looking forward to it.

Posted by Mike Schoonveld at 6:12 AM No comments: